This is some blog description about this site
Tokyo Skytree prepares to launch a special "Avengers" event during this summer!

From a succesful superheroes franchise "Avengers", now the latest episode has already launch in theatre as "Avengers : Infinity War" and Japan is also another country where it receives a warm welcome from viewers and thus set Tokyo, the capital city, to strengthen its varietes at Tokyo Skytree, the highest tower in Japan, to launch a special event for this year's summer!

This event is called TOKYO SKYTREE : HEROES in the INFINITY SKY will be held from May 14 until 16 July 2018 at Tokyo Skytree, Tokyo. Visitors will have a chance to experience the atmosphere of superheroes from avengers franchise including life-sized figures of Dr. Strange, Black Panther and some cool Avengers team members! The area where visitors can participate this event is called Tokyo Skytree's Tembo Galleria which stands high at 450 Metres above the ground level and visitors will get a chance to see the long horizon of Japan's sky including the iconic mountain of the country : Mount Fuji! While the event alone might not sounds interesting but it is not only the figure of superheroes thay join the army on this tower but there will be a special performance during this period and visitors can also enjoy a unique food with avengers-theme menu for a limited time and...YES! the most important thing that most of us should not be missed is "Limited items" that will be on sale only during this special period.

So, if you are planning to visit the capital of Japan, Tokyo Skytree should be on your bucket list as well since it is an experience that is rarely seen today! 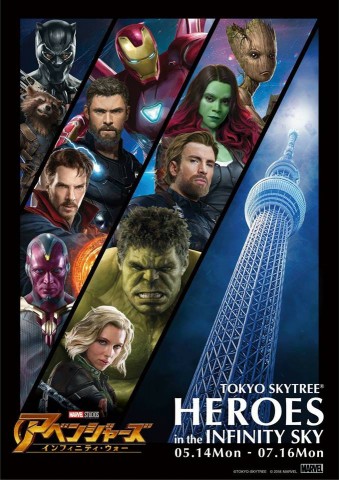 How to get there?

The easiest way to get to Tokyo Skytree are as followed:

1. Take subway Asakusa Line (A) and get off at Oshiage train Station

2. Take subway Hanzomon Line (Z) and get off at Oshiage train Station

4. Take shuttle bus from Ueno Station to Tokyo Solamachi and walk to the tower (this mall just located next to the tower)

5. Take shuttle bus from Tokyo Station to Tokyo Solamachi and do the same as 4

Don't forget that our heroes are waiting for you, so don't miss this chance!!!

รถบัสไร้คนขับแห่งอนาคตเริ่มทดสอบวิ่งแล้วที่คิวชู!
New Digital Art Museum on Odaiba will be unveiled ...