This is some blog description about this site

Oat Tomapat has not set their biography yet

​Greetings everyone! Let's start a fresh 2019 year with a news related to the transportation of Japan which is currently an important route for any oversea visitors who visit Japan! Currently, any visitors who wish to travel to Kawaguchiko by train must change the train at Otsuki Station where it belongs to both JR and Fujikyu Railway Company b...
Continue reading
3390 Hits
0 Comments This Week we will introduce news about a new 5-star hotel in Kyoto which located adjacent JR Kyoto Station with a Japanese design that reflects the art and way of Japanese living space. Now let's move to see the detail! This newly built hotel isnamed "The Thousand Kyoto" located on the east side of JR Kyoto Station with a plan of grand op...
Continue reading
901 Hits
0 Comments

New rules for participants of Shirakawago Light up event 2019 Currently, snow is falling in many parts of Japan and thus starts the winter season for this year. As for one of the iconic tourist attractions of Japan, Shirakawago-a world heritage site designated by UNESCO is also a must see place when visiting Japan. For this charming village, it will hold an event called "Shirakawago Light up" for 6 days durin...
Continue reading
1599 Hits
0 Comments ​Recently, Ministry of land, infrastructure, transport and tourism has announced that it will provide a new measurement to ban any passengers who carry a knife onto the train to prevent any assault to other passengers or train's properties.  Several months ago, there was an incident when a passenger on shinkansen who carry a knife and...
Continue reading
828 Hits
0 Comments

Let's hear the power of Japanese music in Tokyo!

This week, we will introduce information about the arts of Japan but the word "art" does not mean that we are introducing any art museum to you but we would like to introduce a Japanese traditional music show performed by experienced musicians who won many music contest prizes and been to perform their show in other countries. The show is ca...
Continue reading
954 Hits
0 Comments

Unseen in Tokyo : Horde of lucky cats in Gotokuji For this week, we will take everyone to visit an unseen spot in a bustling city of Tokyo which surely makes all visitors to feel as they are in a different world with a uniqueness of "Japan" to see here and that place is a temple named "Gotokuji" or temple of lucky cats Lucky cat is widely considered as a Japanese charm which can bring good l...
Continue reading
543 Hits
0 Comments

7 Japanese Foods to try during autumn At this moment, many places in Japan is now at its peak for autumn this year! Therefore, the content for this week will mainly focuses about foods which are widely regarded as a must whenver you have a chance to visit Japan during this season! There are many kind of foods in Japan ranging from a budget easy and quick snack to a 3-star of Michel...
Continue reading
1030 Hits
0 Comments This week, I will introduce 3 attractions in Japan which have been regarded as "3 Greatest View". First, let's read about the brief origins of this matter to understand the overall concept. These 3 great views of Japan is called 日本三景 Nihon Sankei. Originally, the criteria to judge each view was an influence from Japanese scholar na...
Continue reading
995 Hits
0 Comments

Japan will raise consumption tax to 10% in October 2019 ​This week, I will write about the consumption tax rate that has been discussed for a long period of time since the Prime Minister Shinzo Abe took the seat of Japan Prime Minister. Prime Minister Abe is eager to launch the plan of tax raising in October 2019 after the initial plan has been postponed for two times already. Tokyo-Prime minis...
Continue reading
774 Hits
0 Comments

5 Great temples for observing autumn light up in Kyoto 2018 ​This week, I will stay at the topic concerning about autumn leaves in Japan, but this time, the story would be focused about the former capital of Japan. Yes, it is the city of Kyoto, Kansai Region, Japan! Currently, there are around 1,600 Buddhist temples registered alone in the vicinity of Kyoto City, so choosing proper temples to visit is a...
Continue reading
1460 Hits
0 Comments This week, we have an exciting news about shinkansen (a.k.a High Speed Train in English) with a new technology to strengthen its ride and provide more comfortable for passengers.JR East just announced on 3 October 2018 that its newly developed train will get a code name "ALFA-X", with a real pre-production of 10 cars (car no 1 and car no 10 as...
Continue reading
1779 Hits
0 Comments

​Hello everyone! This week, I will write a story about the forecast of autumn foliage in Japan for the year 2018 from the snowy Northern Region known as Hokkaido through the main island of Honshu and finally focus on the Island of Kyushu which is the southern part of the country. First thing first, I would like to inform everyone tha...
Continue reading
1561 Hits
0 Comments

Japan plans to increase its immigration officers by 500 in 2019 ​For this week, we will take you to read some news regarding about immigration problems in the airport which has been in controversial for a long time since Japan has launched "No-Visa requirement policy" to many nations from South East Asia countries and thus made a huge wave of foreign visiting the country with a sky rocket rate&nb...
Continue reading
862 Hits
0 Comments

A new aspect of accommodation,called Shukubo, in Japan has emerged!

After the incient of Airbnb which removed more than 62,000 rooms that haven't been registered properly, this was a major blow to many foreigners who lost its booking confirmation just a couple days before their arrival in Japan and caused a chaos to most of them with the worst case of canceling their thip to Japan. However, after the storm has passed, the new era of staying in a new aspect of accommodation in Japan has emerged from the ashes!

New Digital Art Museum on Odaiba will be unveiled soon!

The new art museum or formally called "MORI Building DIGITAL ART MUSEUM" will be opened on artificial Island of Odaiba, Tokyo, Japan. The museum will opens its door to visitors from 21 June 2018 onwards with a admission fee of 3,200 Yen for adults and 1,000 Yen for middle school students (Age 3 or younger is FREE). Insdie this meseum, there will be many zone for visitors to explore :

-Borderless World : This zone will let visitors to lost themselves with a boundless imagination of formless substances which changes as the humans walk. 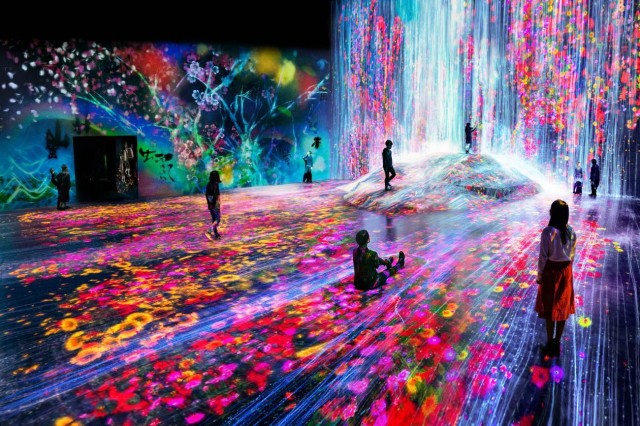 -Athletics Forest : This zone has been designed to encourgage onself awareness which is based on the concept of understanding the world through the body and thinking about our world in three-dimensionally. 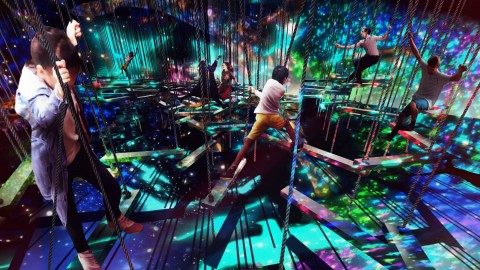 -Future Park : The area where it has been designed as an educational project and experimental field for collaborative creation. If you are bringing your kids with you, this zone will definitely be the most favorite to them 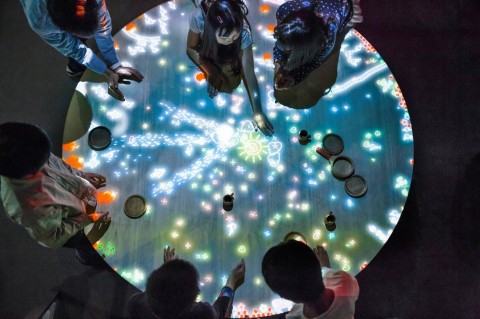 -Forest of Lamps : A highlight of the museum, the area has been placed with lamps that seems to be endless and uncountable! But that's still not the best part of it becasue the great thing will happen when a person stands still close to one of those lamps, it will be illuminated and keep sending its light to adjacent lamps and it will keep continue until the light travels back to the starting lamp. 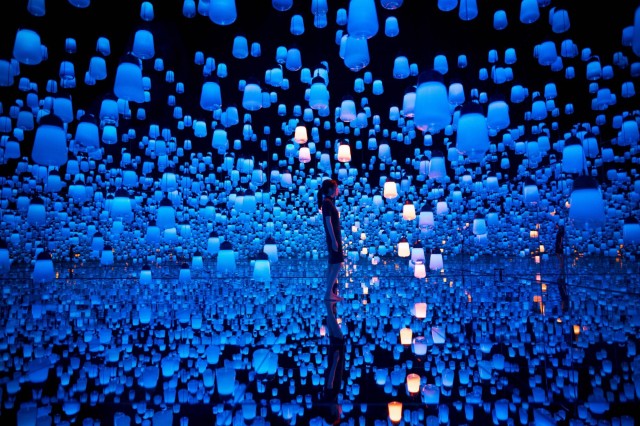 -EN Tea House : Visitors will be amazed by the technology of today while they are holding a cup of tea and witness all the leaves to drop and keep bloming as an endless cycle as long as there is a water in a cup. Moreover, the flower illustrated in a cup of tea will also change according to the seasons of Japan, and if you find that holding a cup of tea is too boring, why don't you try drawing a zen circle called "Enzo"  which is the way of practicing Zen (one of religions in Japan). The artworks will not only capture the drawing style but this captured stroke will also express the depth, speed and power hidden with in each brush stroke too! 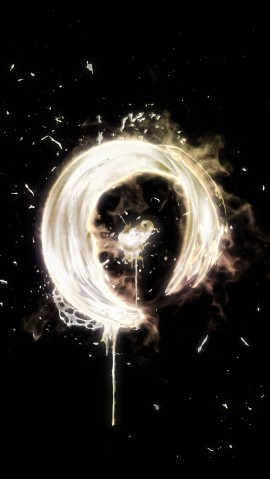 How can I go there?

Actually, there are many ways to get to the Island of Odaiba, but we will introduce only the easiest routes as followed :

1. Hop on a Yurikamome Train, a robotic train automatically controlled from the center (Yes! There's no train driver on the train at all) and get off at Aomi Station and a short walk to Palette Town Buidling where museum is located inside.

2. Takes JR Yamanote train to Osaki Station and then change the train to Rinkai Line and leaves the train at Tokyo Teleport Station then another shortwalk to Palette Town Building.

All of data and pictures were taken from the official website of museum : https://borderless.teamlab.art/

Tokyo Skytree prepares to launch a special "Avengers" event during this summer!

From a succesful superheroes franchise "Avengers", now the latest episode has already launch in theatre as "Avengers : Infinity War" and Japan is also another country where it receives a warm welcome from viewers and thus set Tokyo, the capital city, to strengthen its varietes at Tokyo Skytree, the highest tower in Japan, to launch a special event for this year's summer!